This adventure began a month or so ago, I was sat in the office when I spotted a voicemail on my phone, a quick listen and a call back and I had been informed that we had won a runners up prize in a giveaway I'd entered on the Natural History Museum Website, an invitation to a preview and the official opening of the new Hintze Hall display. 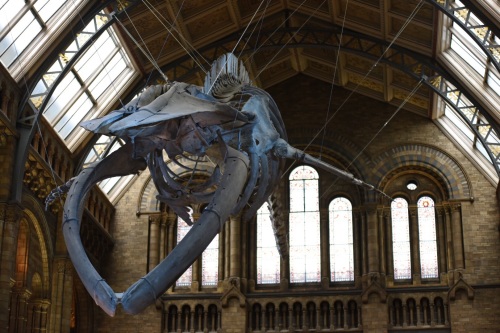 Hope (taken by me during the preview)

I had to hold in the squeals, not only do I feel a huge sentimental attachment to the natural history museum through my memories of visiting as a child but also I knew that Dexter would be beside himself with excitement, that boy loves the NHM. His love affair began when he was about 2 1/2 (yep really) he started bugging us to take him to 'the big museum' and that was all he wanted for his birthday, so when his birthday rolled round we whisked him away for a few nights in London, with his birthday to be spent at the museum. We were there for opening and I kid you not we were there until they wanted to shut the doors, he walked every inch of that place with a face full of joy and amazement at every turn. 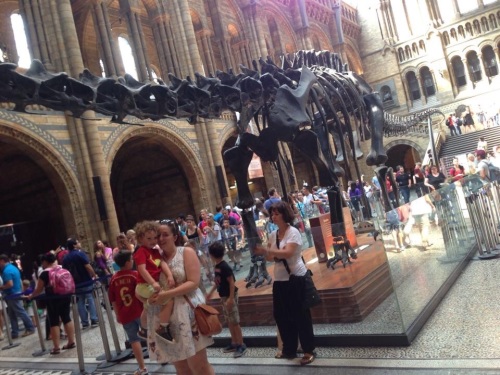 Me and Dexter on his 3rd birthday

So anyway let's stop reminiscing and get up to date, we had an invitation to the opening and so a trip was planned, air bnb booked and everyone set about getting very excited. Time dragged waiting for the big day (but that turned out to be handy as dex requested a special Tshirt for the occasion so I needed time to get the creative juices flowing) then suddenly it was here.

We travelled up to London on Thursday, settled into our airbnb apartment then went for a walk around the outside of the NHM, we saw the red carpet which Dex declared must be for him, then we rather excitedly went to bed in anticipation for the next day (perfect timing too as the documentary was showing on tv so we watched that before shutting our eyes) 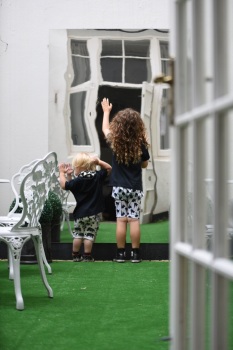 Friday morning rolled round, up at the crack of dawn and by 8.30 we were stood with the other lucky winners wanting to be let in. From the moment we arrived every member of staff we met was amazing, they all took the time to chat to us, to listen to Dex, to answer his questions and show him cool stuff. Just waiting in the queue to get in he held a tiger shark jaw, some pilot and hump back whale bones, a meteor and some lava. He also gave back and did some posing for anyone that wanted a photo...and all of that before 9am. 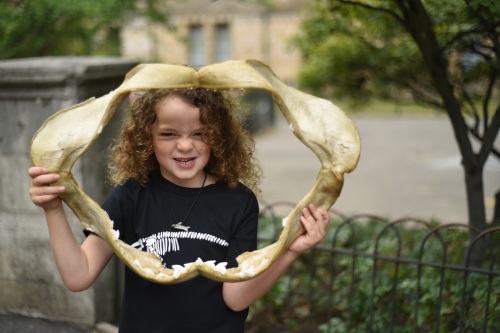 Dex getting up close with some exhibits

Which is when they opened the doors and let us in. Dex closed his eyes tightly and told me to tell him when he was walking through the doors. The look of wonder on his face as he first saw Hope and took in the new display was magical and as I looked around I saw that he wasn't the only one, everyone was the same (including me I imagine).

As you walk into Hintze Hall now and look up to Hope you can't help but fall under her spell, her size, the way she is swimming in the air above you about to dive is beautiful, you can feel the energy, you can feel the hours of work that has gone into it, and the bucket loads of love and passion that surges through every person thats been involved with the project. It's an instant love affair with Hope, she has snuck in, with big shoes to fill from her predecessor Dippy but do you know what I think she can do it. So yea in short Hope the blue whale is perfect. ( Now normally my top NHM tip is to avoid the queues by entering through one of the museums side entrances, where the queues are so much shorter than at the front....however I think if you want the wow factor of Hope you need to come in from the front, nothing is beating that first view of her as you come through the doors and look up into the hall, so my new top tip is to stand in the queue !!! EDIT if you are planning to see the various paid for exhibits during your visit then I whole heartedly recommend getting a membership for one member of your party, not only did this work out a lot cheaper for us to see everything it also allows you to skip the queues...yep even when there's thousands of people you just walk straight past them, which has got to be worth the membership fee on its own, add to that discount in the cafes and the shop and your onto a winner ....we totally abused the retail discount) 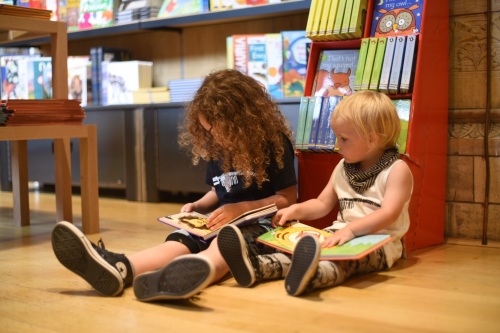 As well as getting to be the first members of the public to see Hope we also had the amazing opportunity to meet the people behind the project and much like every member of staff we had already met they'd were all utterly lovely, Dexter got to meet the director or the museum, Sir Michael Dixon as well as the director of development and communications Fiona McWilliams, and a number of the people that were involved in the cleaning and restoration of Hope including Arianna Bernucci and Lorraine Cornish (sorry if I've missed anyone, we loved you all honestly). Dexters tip top favourite person though was Richard Sabin who gave Dex his full attention, showing him personal photos and videos from the work that he had done for Hope, answering his questions and telling him a little secret about Hopes fins. He sent us up all the stairs to go and look at Hope from straight ahead, as it's at that point you can see her fins aren't straight and that in fact they have positioned her as tho she is diving to the left. As you can imagine once Dex saw it we had to run back and tell Richard we had seen it and how totally cool it was. 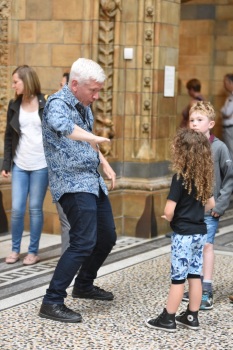 I think Dex could have listened to Richard all day

After all the fun of the preview the doors were opened to the rest of the public (which quickly made us realise how amazing the preview had been) We waited as the first few people came in just to see their faces as they entered and we weren't disappointed (it's a bit like at a wedding where everyone thinks you should watch the bride enter but actually it's the groom you should watch because that's where you can see the magic and the look of pure love, instead of watching Hope, watch the people and take in their magical pure reactions).

Of course we then kept up tradition by walking around the museum all day (and the next day too) now with Axel along for the experience too. Dex showed him everything, telling him facts and leading him off to certain displays, by the time we left we all had a million new amazing memories to treasure ( and the photos to go with them). 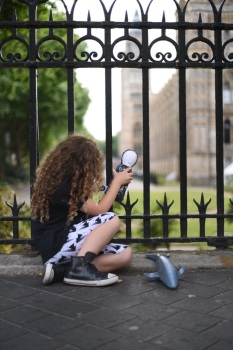 Dex looking longingly back at a now closed Museum

The Natural History Museum is and will always be my favourite place, my happy place, it is beautiful, it is educational, it is awe inspiring, it is breathtaking, it is fun and it is ingrained in us, nothing will ever come close, and it turns out that this love has been passed down from me to Dex (and hopefully Ax too). When we came to leave at the end of our second full day Dex asked to say goodbye to Hope, as soon as he did the tears started to roll, he wasnt a kid having a tantrum he was a boy, feeling all the emotions that the museum evokes in you, he was feeling the love he has for this special place and he knew he was going to miss it. His tears were real and they were beautiful and it's a moment I will never forget. 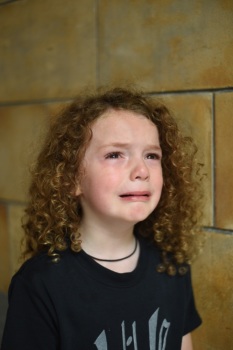 So in case it's not clear already, the Natural History Museum is our top London attractions, if you are visiting the area and can spare even a few hours then I implore you to visit, and if your local and it's just somewhere you never get round to going or you haven't been in a while, get yourself down there, go and immerse yourself in everything that it has to offer, I promise you won't regret it. 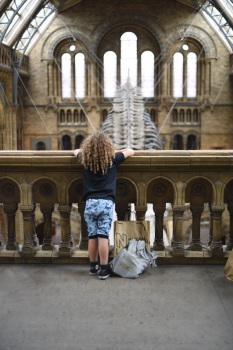