I thought since we’ve just had shark week I would take the opportunity to talk about one of my conservation illustrations. Occasionally I draw scenes to represent some of the pressures facing some of the amazing animals we share the planet with and this particular one is all about the plight of shark finning on our shark populations world wide. 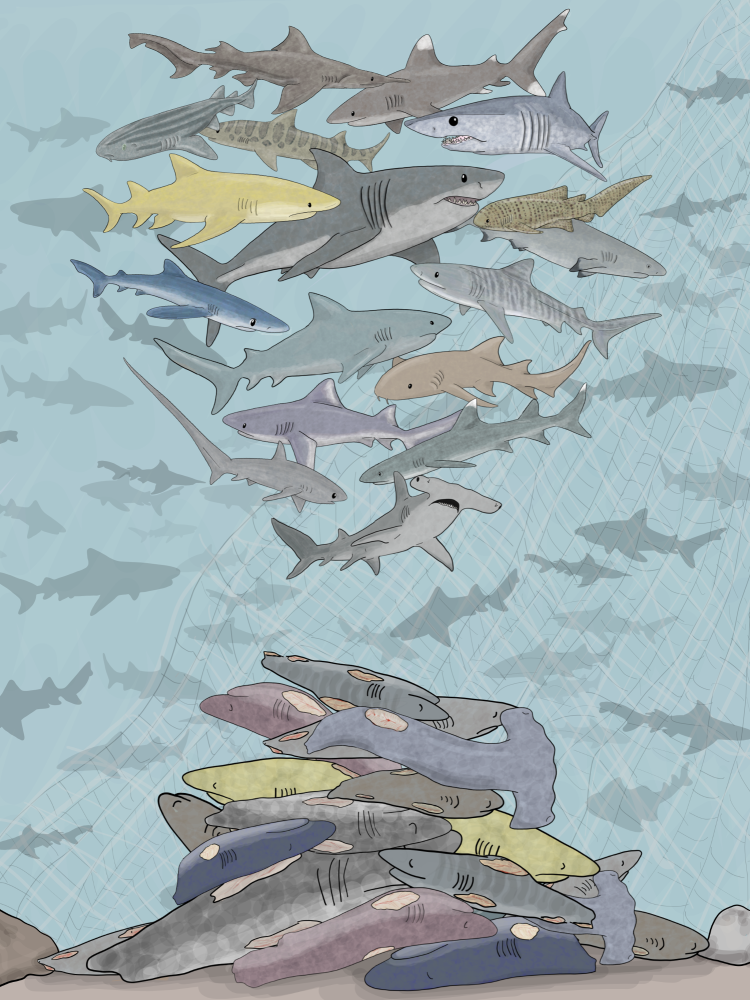 Its not easy to look at but then its never easy to look at the reality of what humans are doing to the planet.
Every day over 250,000 sharks are caught and killed. Those caught for their fins often have the fins chopped off and then they are dumped back into the ocean to die a horrible death, and why, well its mainly for shark fin soup. An expensive, tasteless dish that is sold for hundreds.

Sharks are also caught for their meat, you can find shark steak on the menu in lots of places, or sometimes it can be disguised as other things with names like Whitefish or Steakfish which mean you don’t realise what you are ordering. Learning about these practises helps you to buy and eat responsibly. And its not just for the sharks benefit either, shark meat contains dangerously high levels of mercury, way above what is safe for human consumption, and yet it is still allowed to be sold. So to protect yourself and the sharks that deserve to swim free in our oceans just say no to eating sharks.

The other area that you can help with is to avoid shark souvenirs when on holiday, you will often see shark jaws or preserved sharks available for sale to take home as a souvenir for your trip. By refusing to buy these items we cut off the demand for them and in turn help to leave those sharks in the sea where they belong.

An important point to make is that the shark fishermen for the most part aren’t the bad guys here, they are just people trying to survive and feed their families and people pay for dead sharks, so that’s what they provide. A shift to eco tourism in the areas where shark fishing is currently the only answer will mean that they can switch from fishing to shark viewing trips, taking people and showing them the sharks out in their natural environment. Eco tourism can replace the fishing income for these people, but it requires a shift in peoples perception, they need to start loving sharks and appreciating them in their own worlds to make this trade grow and thrive.

My piece shows a selection of sharks swimming free in the ocean above a growing pile of finless carcasses. The sharks are shaped to subtly represent an egg timer to represent the fact that they are running out of time, we can not continue to pull them from the ocean in the huge volumes we are, they will not survive. A lot of sharks have very slow reproduction rates, with gestation taking around a year and sexual maturity taking anywhere from 20 years to 150 years (in the case of the extraordinary Greenland shark) combined with falls in the population meaning meeting the right mate can be a longer harder process. All of that together means that they can not replenish their numbers.

Sharks need our help. They need us to talk about their plight. To educate those around us about how they are abused by us and how we can help. Everything begins with education, tell your kids, your parents, your friends, your neighbours and bob down the street.

Say no to shark fin soup, and any shark meat, learn what shark meat can be labelled as, shop responsibly, and whenever someone says they are scared of sharks remind them that every year world wide sharks kill around 6 people whilst people kill 100 million sharks, its not us that should be scared of them, its them that should be terrified of us.