This is a new series of blogs, of interviews with some wonderful people who work within the animal industry, from zoo keepers, to museum curators and everything in between and those that are on the path to working in these positions too. Be inspired for a future where you can combine your love of animals with your day job. I hope you enjoy these interviews, that you can learn something from them and they can inspire you. 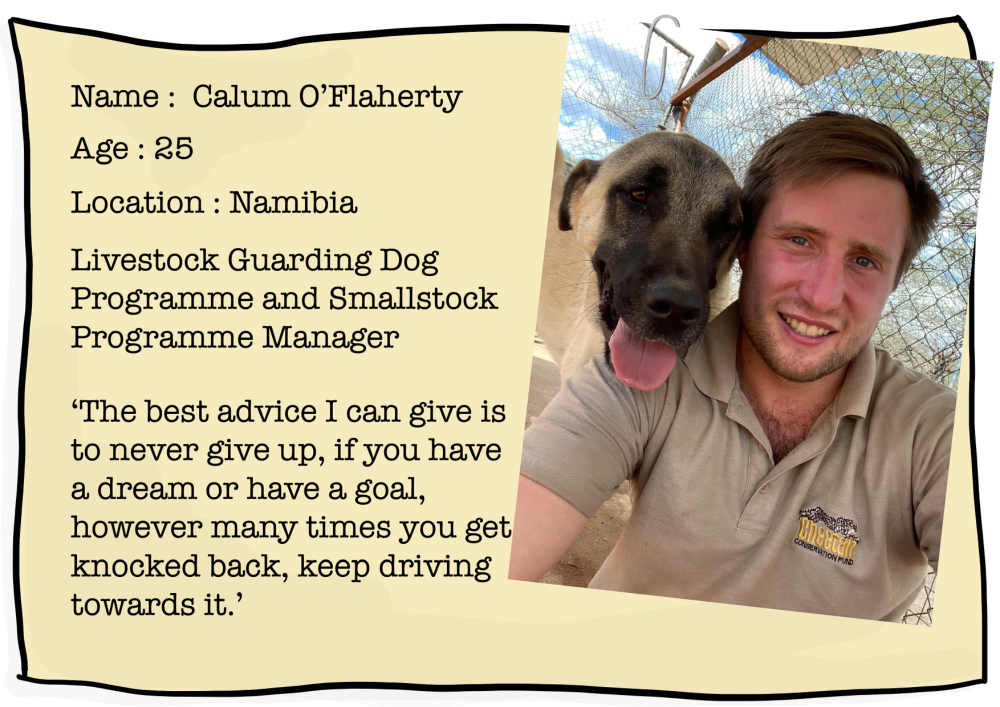 Now let me introduce you to Calum...

What do you do?

I am the Livestock Guarding Dog Programme and Smallstock Programme Manager.

In Namibia where we are based there is a lot of Human-Wildlife conflict, which means cheetahs, leopards, wild dogs are all being killed as they are taking farmers livestock, the program I run here at the Cheetah Conservation Fund which overall is called the Model Farm aims to help educate local farmers on the best farming practices in an aim to best protect their animals. The smallstock programme, focuses mainly on good livestock management which if undertaken correctly can give you up to 60% re-education in livestock losses. The practices in this programme include things such as breeding your animals at one time of year so the kids/lambs can grow up together until big enough to go out with the herd so they are not easy prey for predators. We also promote the high fences of the kraal to reduce the risk predators getting in. Finally, we promote good herd health so that there are no injured or ill animals that go out into the bush as these would be easy prey for predators too of which we are trying to reduce.

Once I’ve promoted the smallstock programme I will then convince farmers to get a dog to further help mitigate the human-wildlife conflict.

So we breed the dogs here and the farmer invests N$1500 which is about £80 and this dog will then be on their farm guarding their livestock. With a dog we have seen a reduction of 80-100% in livestock losses, and there is currently a two year waiting list of farmers wanting these dogs as they’ve heard how good they work. We place about 20-30 dogs a year but I am hoping to increase that by bringing in more breeding dogs so that we can cover a wider are of Namibia and hopefully start spreading out further into Africa. At the moment I currently have 181 dogs out on farms and since the program stated 25 years ago we have placed 650 dogs and because of that Namibia I believe has the highest population of wild cheetahs! The dogs are Anatolians and Kangals originated from Turkey where they were used to guard against bears and wolves but due to the similar terrain an temperature of turkey to here we brought them over here and they work so well. What they do is run perimeter checks out with the herd, marking their territory and that scent of another predator (the dog) in the area is usually enough to warn off most predators but if something comes a bit closer then they will stand their ground between the predator and the heard and that then reduces the easiness of the meal for the predator.

How did you get into it?

I completed my Masters dissertation on the Livestock Guarding Dogs back in 2017. I fell in love with the programme and with CCF as I really felt they were making a difference with their observation work so I left my CV with Dr Marker when I left. Two years later I got an email from Dr Marker asking me to come and run the programme and I handed my notice in the next day at work basically and was out working with CCF within the month.

What made you want to do what you do?

Ever since a young age I had a passion for animals and I was very lucky while growing up that I got to experience two trips to Africa. It was then that I fell in love with the continent. I decided on those trips it was going to be my goal to work in Africa. As I grew up I learnt all the difficulties facing the wildlife populations in Africa and it was then that I told myself, I wanted to make a positive difference in helping wildlife populations across Africa. This is what drove me to do what I do and I really feel like I am doing that in my current job.

Did you need any particular qualifications?

I have an undergraduate degree in Geology with Palaeobiology (Rocks and Dinosaurs) from the University of Leicester but my first love was always animals. Therefore, I took a year out from University getting lots of work experience at different zoos and wildlife parks and on conservation programmes abroad. I then completed a Masters in Global Wildlife Health and Conservation at the University of Bristol. It was both the experience and the qualifications which helped me get the job.

Any tips for a young person that wants to do what you do?

The best advice I can give it to never give up, if you have a dream or have a goal, however many times you get knocked back, keep driving towards it. I have had many set backs in my life but I kept going and kept working hard to achieve my dream.

What’s the best thing about what you do?

Apart from working with some amazing animals, the dogs, the cheetahs and being surrounded by such incredible wildlife, it is actually seeing the difference this programme makes to farmers life, watching kids once scared of dogs in Namibia, fall in love with them when we introduce them through educational talks – that’s probably the best thing about what I do.

It’s hard to pick one but either the Leopard, Rhino, Mountain Lion of Platypus

What was the first animal that you fell in love with?

It was probably the leopard

What do you like to do in your spare time?

Living out in Namibia, I have amazing wildlife all around me and so in my spare time I like to go out and pursue my other passion which is wildlife photography. I hope to be able to show people how incredible these animals are through my photos and get them as interested in them as I am through them.

If you weren’t doing what you do now, what else would you love to do?

If I wasn’t doing what I do now I’d probably go back to doing my previous job in the UK which is working as a Zookeeper, helping educate and inspire people who come into the zoo about the animals and their necessary conservation. As it was a zoo where I originally fell in love with animals.

My Dad is my main inspiration as well as the rest of my family, my girlfriend and then in the greater wildlife family people such as Sir David Attenborough, Steve Irwin, Ben Fogle, Steve Backshall, Liz Bonin and Gordan Buchanan have all inspired me whether it was from talks of theirs that I’ve gone to see of the numerous wildlife programmes that they’ve created and that I’ve been able to watch.

Where can people find you?